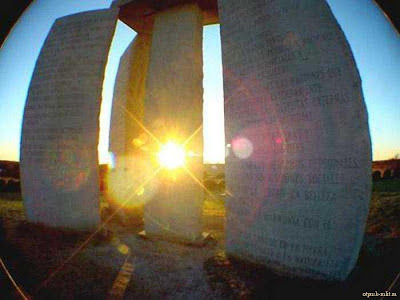 “There are many ways to make the death rate increase”
-Robert McNamara in New Solidarity, March 30, 1981

"Since its inception, the U.N. has advanced a world-wide program of population control, scientific human breeding, and Darwinism."
-Claire Chambers, The SIECUS Circle: A Humanist Revolution.

"Out of the full spectrum of human personality, one-fourth is electing to transcend. One-fourth is resistant to election. They are unattracted by life ever-evolving. Now, as we approach the quantum shift from creature-human to co-creative human the destructive one-fourth must be eliminated from the social body. Fortunately you, dearly beloveds, are not responsible for this act. We are. We are in charge of God's selection process for planet Earth. He selects, we destroy. We are the riders of the pale horse, Death."
- Barbara Marx Hubbard, former Democratic vice-presidential candidate, prominent futurist and occult leader, currently an advisor to the U.S. Department of Defense, in The Book of Co-Creation, self-published, 1980, Part III, p. p. 59.

"The present vast overpopulation, now far beyond the world carrying capacity, cannot be answered by future reductions in the birth rate due to contraception, sterilization and abortion, but must be met in the present by the reduction of numbers presently existing. This must be done by whatever means necessary."
- INITIATIVE FOR ECO-92 EARTH CHARTER

"The United Nation's goal is to reduce population selectively by encouraging abortion, forced sterilization, and control of human reproduction, and regards two-thirds of the human population as excess baggage, with 350,000 people to be eliminated per day."
- Jacques Cousteau, UNESCO Courier, Nov. 1991

"It’s terrible to have to say this. World population must be stabilized and to do that we must eliminate 350,000 people per day. This is so horrible to contemplate that we shouldn’t even say it. "
- Jacques Cousteau, UNESCO Courier, Nov. 1994.

"Those least fit to carry on the race are increasing most rapidly ... Funds that should be used to raise the standard of our civilization are diverted to maintenance of those who should never have been born."
- From The Pivot of Civilization quoted in Margaret Sanger (founder of Planned Parenthood), by Elsah Droghin.

"Childbearing [should be] a punishable crime against society, unless the parents hold a government license ... All potential parents [should be] required to use contraceptive chemicals, the government issuing antidotes to citizens chosen for childbearing."
- David Brower - first Executive Director of the Sierra Club; founder of Friends of the Earth; and founder of the Earth Island Insitute - quoted by Dixie Lee Ray, Trashing the Planet, p.166)

"If radical environmentalists were to invent a disease to bring human populations back to sanity, it would probably be something like AIDS. It has the potential to end industrialism, which is the main force behind the environmental crises."
- Earth First! newsletter

"At present the population of the world is increasing at about 58,000 per diem. War, so far, has had no very great effect on this increase, which continued throughout each of the world wars.. War has hitherto been disappointing in this respect, but perhaps bacteriological war may prove effective.
If a Black Death could spread throughout the world once in every generation, survivors could procreate freely without making the world too full. The state of affairs might be unpleasant, but what of it?"
- Lord Bertrand Russell, The Impact of Science On Society (Routledge Press: New York, 1951).

"The state of Colorado could seize antibiotics, cremate disease-ridden corpses and, under extreme circumstances, dig mass graves under executive orders...Infected corpses might have to be isolated at temporary morgues to prevent the spread of disease, Estock said. In certain situations, mass cremations or burials might be required. 'I don't want to come across as saying the state's going to make this decision to do mass cremations and ruin the lives of families. That's certainly not the intent,' Estock said. 'But it (the executive order) just gives us maximum flexibility.' "
- Rocky Mountain News, "State prepares for bioterrorism Executive orders give governor additional powers", February 8, 2003

"The first task is population control at home. How do we go about it? Many of my colleagues feel that some sort of compulsory birth regulation would be necessary to achieve such control. One plan often mentioned involves the addition of temporary sterilants to water supplies or staple food. Doses of the antidote would be carefully rationed by the government to produce the desired population size."
— Paul Ehrlich, The Population Bomb, p.135

"A total population of 250-300 million people, a 95% decline from present levels, would be ideal."
— Ted Turner - CNN founder and UN supporter - quoted in the The McAlvany Intelligence Advisor, June '96

"Childbearing [should be] a punishable crime against society, unless the parents hold a government license ... All potential parents [should be] required to use contraceptive chemicals, the government issuing antidotes to citizens chosen for childbearing."
— David Brower - first Executive Director of the Sierra Club; founder of Friends of the Earth; and founder of the Earth Island Insitute - quoted by Dixie Lee Ray, Trashing the Planet, p.166

"If I were reincarnated I would wish to be returned to earth as a killer virus to lower human population levels."
— Prince Phillip - Duke of Edinburgh, leader of the World Wildlife Fund - quoted in 'Are You Ready For Our New Age Future?', Insiders Report, American Policy Center, December '95

"The world has a cancer, and that cancer is man." — Merton Lambert - former spokesman for the Rockefeller Foundation - Harpeth Journal, December 18, '62

"In searching for a new enemy to unite us, we came up with the idea that pollution, the threat of global warming, water shortages, famine and the like would fit the bill ... All these dangers are caused by human intervention and it is only through changed attitudes and behaviour that they can be overcome. The real enemy, then, is humanity itself."
— Alexander King, Bertrand Schneider - founder and secretary, respectively, of the Club of Rome - The First Global Revolution, pp.104-105

"[Sterilization could] be applied to an ever widening circle of social discards, beginning always with the criminal, the diseased and the insane, and extending gradually to types which may be called weaklings rather than defectives, and perhaps ultimately to worthless race types."
— From The Passing of the Great Race by Madison Grant, co-founder American Eugenics Society

"The very word eugenics is in disrepute in some quarters ... We must ask ourselves, what have we done wrong?
"I think we have failed to take into account a trait which is almost universal and is very deep in human nature. People simply are not willing to accept the idea that the genetic base on which their character was formed is inferior and should not be repeated in the next generation. We have asked whole groups of people to accept this idea and we have asked individuals to accept it. They have constantly refused and we have all but killed the eugenic movement ... they won't accept the idea that they are in general second rate. We must rely on other motivation. ... it is surely possible to build a system of voluntary unconscious selection. But the reasons advanced must be generally acceptable reasons. Let's stop telling anyone that they have a generally inferior genetic quality, for they will never agree. Let's base our proposals on the desirability of having children born in homes where they will get affectionate and responsible care, and perhaps our proposals will be accepted."
— From "Galton and Mid Century Eugenics" by Frederick Osborn, Galton Lecture 1956, in Eugenics Review, vol. 48, 1, 1956

"Those least fit to carry on the race are increasing most rapidly ... Funds that should be used to raise the standard of our civilization are diverted to maintenance of those who should never have been born."
— From The Pivot of Civilization quoted in Margaret Sanger(founder of Planned Parenthood), by Elsah Droghin.
Posted by Unknown on 26.4.09

Don't look behind the curtain!